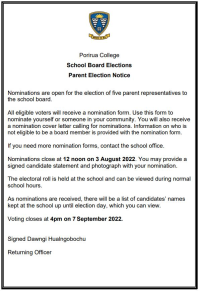 Nominations are open for the election of five parent representatives to  the school board.

All eligible voters will receive a nomination form. Use this form to  nominate yourself or someone in your community. You will also receive  a nomination cover letter calling for nominations. Information on who is  not eligible to be a board member is provided with the nomination form.

If you need more nomination forms, contact the school office.

Nominations close at 12 noon on 3 August 2022. You may provide a  signed candidate statement and photograph with your nomination.

The electoral roll is held at the school and can be viewed during normal  school hours.

As nominations are received, there will be a list of candidates’ names  kept at the school up until election day, which you can view.

School Board Elections
+ Text Size -
Do NOT follow this link or you will be banned from the server!